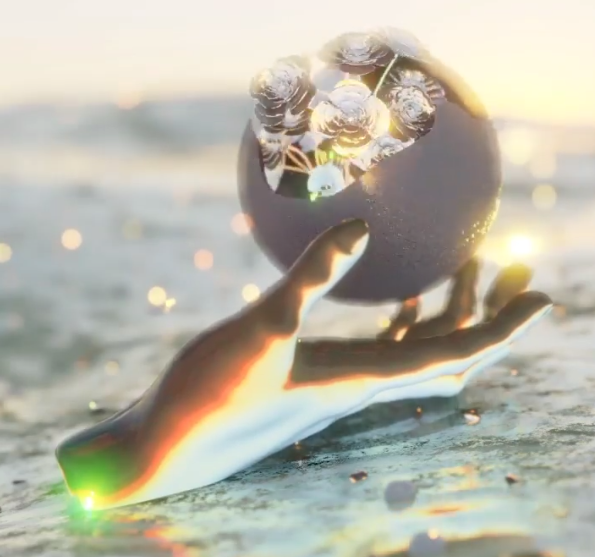 With the title of this project being “Visual Signals,” it seems only right to discuss some of the original vaporwave art and adjacent media I have discovered. Plenty of vaporwave media originates from derivative material, which I would claim is a good criticism the complete mess copyright has become over the past century. However, the scene has not subject itself solely to extracting media from old sources, the scene has plenty of great artists creating things of their own design.

As with many lists on this site, there is no express order based on quality, especially with art being so subjective, however I really wanted to showcase some of the amazing visual talent from the scene.

Onto the vaporwave art!

warakami is one of the reasons I wanted to start this article. I love their art, and don’t see them discussed, often, within the social circles I frequent (unless I bring them up.) Classic pop art style blended with vaporwave visuals, warakami creates some amazing vaporwave art, which I am thrilled to know are on clothing, because I might have to buy some of those t-shirts, now that I know they exist.

I actually discovered warakami via Tumblr, and they were one of the reasons I decided to make an vapor/retro-themed Tumblr which I still update to this day. They’ve been active in the scene for several years, and made beautiful work the whole time.

dualvoidanima is another vaporwave art genius I really enjoy, who I rarely hear about in the places I have been active. They make a lot of art in the forms of animated loops and 3D modeling. The style is surreal, and somewhere between synth and vapor aesthetic, feeling, often, very retro, while being produced with modern quality and resources.

Likewise, I discovered them back when I was working on an aesthetic Tumblr page, and fell in love with the art style. I think they deserve more attention, because they make phenomenal art, and consistently. As their Patreon states, they upload almost daily.

I actually discovered hysterical_melancholy while making this list. They did a collaboration with warakami, and I must say I am pleased with the discovery. They actually have a couple separate projects, and as a fan of photography, I am happy to find artists who take advantage of the medium to feed the community. Vaporwave art is pretty flexible, and people exploring various options can generate new paths.

A friend and previous contributor to Visual Signals, Z.E.R.O does art, music, writing and visuals in the scene. Not to mention, they are also a co-founder of ATMO™, a sublabel of Vaporwave Tapes Brasil alongside default.cfg. Despite having so many hats to wear, Z.E.R.O‘s artwork is absolutely remarkable. Amazing visual renders of 3D models they’ve created.

The images look like photography of some cyberpunk world we have yet to realize. Z.E.R.O does more dreampunk art than traditional vaporwave art, but he has a history in the scene. Later in this list is Zer0 れい, who is a different artist, not to be confused.

VANITAS命死 is actually one of my favorite musical artists in the wave scene. I have several of their albums in my possession, but they are also a very talented visual artist, the vaporwave art ties are loose, but present, often lending to the dreamier side of things. Another one of the skilled 3D modelers on the site, who has a clear grasp of how to make things fit the scene, while not making works that feel derivative. I definitely appreciate the designs’ magical, dreamlike nature. The pieces often sparkle and seem otherworldly. I find them generally beautiful.

Not at all to be confused with Z.E.R.O–both are talented artists, but very much different people. Zer0 れい makes dreamy art more in the fantastical and surreal fashion. Beautiful dreamscapes that actually lend themselves to one of the prettiest tapes I own: BREATHE on theINFINITIpool. The tape’s labradorite-iridescence works beautifully with the artwork Zer0 れい designed for the album.

I love the visuals of floating forms on otherworldly surfaces and overall attention to shape for artistic value. Plenty of art focuses on creating specific objects to identify, but plenty of Zer0 れい‘s work shows just how beautiful a prism or cube can be, unmodified.

Few people can brag that they had the chance to do visuals for someone as renowned to the world of vapor as Death’s Dynamic Shroud. DATAGIRL is just that talented, though. They have a variety of art to their name: people, pools, fountains, gardens, and all done beautifully, with attention to color and style that creates fascinating vignettes that are extremely pleasing to the eye. You are doing a disservice to yourself if you don’t explore their artwork.

I have a personal bias for this artist, as I commissioned them to do the cover for ＧΛＭΞＲＷΛＶΣ on Girly Girl Muzik, but look at how remarkable it came out! Ultimate Ink Trash makes faux retro game box art, and it looks so unbelievably accurate, I would forgive anyone who thought they were some lost artwork for canceled games from the past decades.

He has such an amazing talent for getting every aspect right. The shading, the grungy art style common to 80s and 90s American box art, and the stylistic choices and fashion. It all fits so perfectly, I can’t think of any way to improve it. This particular style of, what I would call a type vaporwave art, blends well with chiptune, as well.

polygon1993 is so renowned for their art that they have been commissioned by Bring Me the Horizon, a huge rock band, to do art for a lyric video, and tour visuals. As such, while still vaporwave art in a core fashion, has clear appeal to other circles. They use CRT and analog media tools to create spectacular retrofuturistic visuals topographically mapping the human body and colorful graphical work that is uniquely tied to them. Their art is a treat, and may even be familiar to those of you who listen to rock music on YouTube. They are not a one trick pony, though. They do other styles of visual art, but this is definitely their trademark.

Another project by musical artist 18 Carat Affair, Fiat LX seems to specialize in post-processing analog artwork. They use bright, but washed colors and analog visuals to create surreal, trippy artwork. It reminds me of some sort of stills of bumpers to late ’80s television segments. The vibrant colors and strange subjects do provide a pretty unique visual style, certainly worth checking out. The kitsch of this design is a very historically “vaporwave art” Google Search example in feel.

The multifarious mingkurray makes many types of artistic media. I know them most for their amazing analog visual art, but they also have a portfolio of graphic design, advertisement and logo work, drawings, paintings and more. They are pretty well known and respected, and one of the many names I discovered through my time in the VILL4IN community.

Having discussed art with them, before, I can say that it is certainly no simple process, based on how long it seems they spend on the work they do. I can only imagine, from what I have seen, that much of the effects work is likely done with truly analog tools. This isn’t inherently vaporwave art, alone, as the VHS style lends to many neoretro spheres, and has a strangely cyberpunk feel, even though retrofuture is… inherently retro, and contemporary cyberpunk doesn’t always share that style.

Somewhat tangent to vaporwave art, but definitely adjacent, pixel art definitely has harmonious roots (chiptune is a thematically spiritual cousin in nostalgia as far as I am concerned) to that of vaporwave. Some artists even use it in their album covers, so I feel it fair to include here. I absolutely adore jubilee‘s highly detailed, brightly colored pixel art.

Having done small pieces, usually below 100px×100px, and it takes me hours. I can only imagine how long some of their work must take, and the physicals on holographic stickers are remarkable. I had to get my hands on some. I especially like the art with a stylized MSPaint window as part of the artwork. Their artwork is so remarkable that they created the first, ever, licensed pixel art for Magic: the Gathering in its entire history.

I also do visual art in a wave style, on occasion. While vaporwave art isn’t my primary focus, it is, indeed a focus. I try to combine traditional art with the surreal, dreamy or kenoptic experiences common in the scene. I don’t have the clean 3D or beautiful VHS effects, but I do what I can with some ink and colored pencils. I’ve even managed to reach the front page of deviantART for a cyberpunk piece, which was pretty exciting. Perhaps one day I’ll have skill to rival others on this list, but regardless, I do enjoy doing art. I’m definitely inspired by many artists within this scene.

Crossover Appeal and My Favorite Takeaways

I do believe there is space, as discussed in my previous article from Issue 6, for artistic crossover between genres. Now that Dreampunk has a pretty confident foothold, identity and aesthetic, while already sharing a heredity, I would feel, with slushwave, there is plenty of space in the scene for those metropolitan and cyberpunk cityscapes, dark alleys and bright sources of light.

I believe there is plenty of room for adoption and exchange of artwork with the pixel, low-res and low-poly communities, as they have plenty in common, and there is already plenty of aesthetic overlap with things like early Playstation artwork. Lofi hip-hop tends to tie in with metropolitan cityscapes and anime, which already is well within the realm of crossover, but even so, both have their own personality, which could lend artistic originality to collaborative work.

I feel that my favorite aspects of vaporwave art are likely the surrealism, kenopsia, familiarity, and, obviously, the hiraeth and nostalgia that come with the fantastical but acquainted. I enjoy the photographic bonds such as architecture scans of malls and liminal spaces. I love the dreaminess, and I love the postmodern creativity of strange juxtapositions. While there are certainly tropes that are timeless to vapor, I do not think every avenue of artistic beauty has been explored. Far from it, I think there is plenty of opportunity to evolve and branch off.

This does not list many of the talented music physicals artists, as I plan to do a piece on album art, specifically, at some point, but I assure you there are plenty of artists in that vein I need to share, as well.

But give these artists a look, because I am sure they would all appreciate a few more eyes. They worked hard, after all.—Tails_155

I would love to see some of these artists contribute to Visual Signals in the future.

A first issue review of the new Vaporwave Magazine – Listencorp.

Caravaggio & The Incredulity of Saint Thomas